‘Crobe’ was a project of mine to promote the idea of a new global financial system with a simulation website. The project name Crobe was a composition of the words Credits and Globe. As the word ‘Credits’ suggests, it was an e-cash solution without real money in circulation. The idea was based on a monthly basic income for every person and a transaction-tax for every transaction within this system. The transaction-tax shall be viewed as the only one tax to be paid and would go straight to the central account. At the same time the central account provides the monthly basic income out of the air as central banks are used to operate.

I was able to create a website to simulate this system with real users in a pretty simple way. Registered users were able to send/receive credits to each other and get the simulated ‘basic income’ every week. Also, the transaction-tax idea was installed and worked out quite well. I thought this idea was a very simple solution with a huge potential in terms of boost people’s creativity. 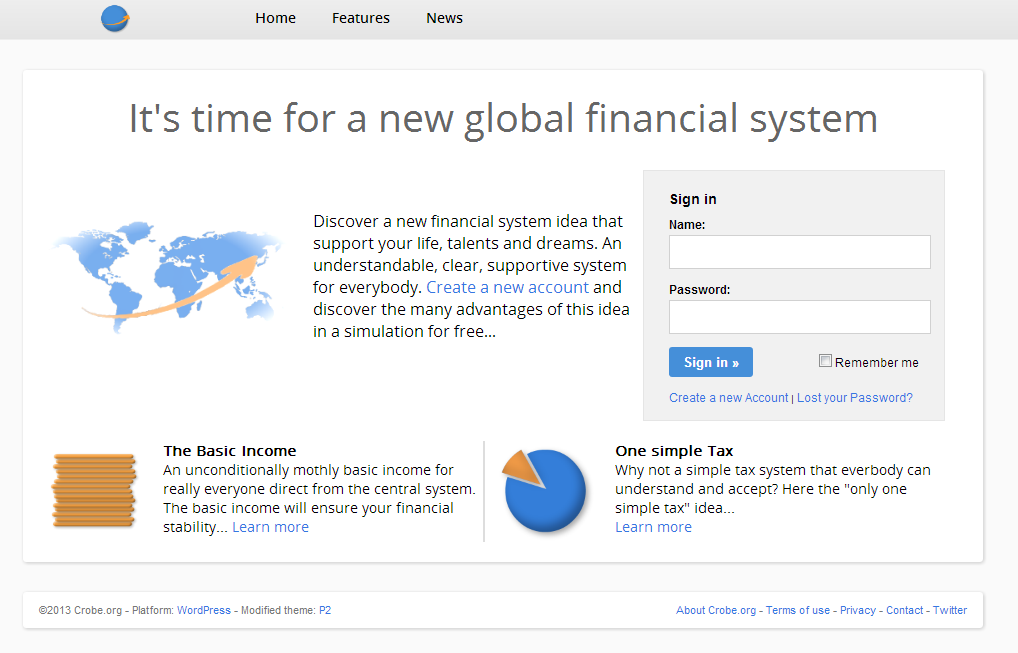 The idea of a basic income was not new but I wanted to combine the thought with other elements in a simulation website in order to promote a vision of a new financial system. In simple words you need only a computer/smartphone, a network like the internet and you can start a whole global financial system for whatever country and connect it with the rest of the world. Just now as very valuable and useful tools for this project PayPal or Bitcoin coming into my mind to accomplish this task.

However, no one cared much about it and two weeks after the launch of this website some US politician came up ‘by chance’ with the idea of a stupid “transaction tax”. The website is offline but I still have the code package ready to install. End of the story.

Now, it is a pleasure to read that Finland plans to start an experiment with a basic income for every adult. In a world like today where machines take over gradually the work from humans it is important to adjust also our financial system in a way that people moving forward along with an ever faster evolving world. If you want to rescue the Eurosystem you have to include a basic income without wasting valuable time to debate it.