Now that we’ve discussed the general concept of value, there seems to be some confusion on what type of value will be best to use. Generally speaking, there are three types of value that are commonly used. The first is the TPO derived value. This is based upon the amount of time the market spends at a particular price range. The second is derived upon the amount of volume that is being transacted at a particular price range. And third, the value that is derived off of the volume weighted average price transacted. Similar to the straightforward volume value, its derived off the average transacted price for a particular period. The value then becomes the 68.2% around this average or 1st standard deviation levels.

The confusion is then in which “Value” is the better one to use within your trading? The simple answer is… any of them. They essentially all tell you the same thing. We want to see when the market is balanced and imbalanced. All of these “Value” methods accomplish this task. It then comes down to what works best for each person individually. Some character traits of each of the mentioned values are the following.

TPO derived value can be “boxy” and will vary based upon the amount of price level aggregations one uses for their indicator. An example would be, aggregating two prices levels into the value calculation. In any event, you are able to still clearly see the VAH and VAL and observe whether or not the market is balanced or imbalanced.

The next way of viewing “Value” is through the volume calculation. This again is just derived based upon the total amount of volume that is being transacted within a given period of time. This appears to be a bit more dynamic and somewhat smoother in appearance. But ultimately, you can clearly see whether or not the market is trading in a balanced state or imbalanced.

Lastly, the VWAP value is as I mentioned derived from the volume weighted average price (VWAP) and 34.1% on each side of the mean (VWAP) which constitutes 68.2% total. This form of developing value is my personal method of choice and is the smoothest in appearance. Additionally, VWAP and its outer standard deviation levels are heavily used with the larger market participants as well as various algorithms including High Frequency Traders.

As you can see by comparing the three together, they’re all essentially telling the same message all centered around the bell curve distribution concept as shown below with value equating to 68.2% – 70% of the trading activity. 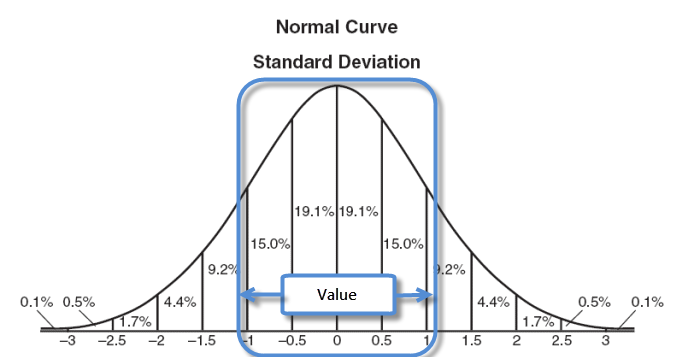 Making the choice of which calculation method then becomes a personal preference. There will be times when the TPO derived value will provide a better reference than the VWAP value or Volume value. They will all have their good and bad moments if you will. But ultimately, it’s the message they’re conveying that is the most important.